Goodreads Monday is a weekly meme hosted by Lauren’s Page Turners. To participate, choose a random book from your TBR and show it off! Don’t forget to link back here and feel free to add your links to the comments so that others can see what you picked.

Hello fellow book nerds and welcome to Goodreads Monday!  This week I will be featuring another WWII historical fiction, one that I picked up this past week. 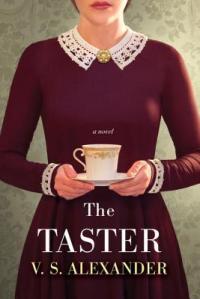 Amid the turbulence of World War II, a young German woman finds a precarious haven closer to the source of danger than she ever imagined–one that will propel her through the extremes of privilege and terror under Hitler’s dictatorship . . .

In early 1943, Magda Ritter’s parents send her to relatives in Bavaria, hoping to keep her safe from the Allied bombs strafing Berlin. Young German women are expected to do their duty–working for the Reich or marrying to produce strong, healthy children. After an interview with the civil service, Magda is assigned to the Berghof, Hitler’s mountain retreat. Only after weeks of training does she learn her assignment: she will be one of several young women tasting the Fuhrer’s food, offering herself in sacrifice to keep him from being poisoned.

Perched high in the Bavarian Alps, the Berghof seems worlds away from the realities of battle. Though terrified at first, Magda gradually becomes used to her dangerous occupation–though she knows better than to voice her misgivings about the war. But her love for a conspirator within the SS, and her growing awareness of the Reich’s atrocities, draw Magda into a plot that will test her wits and loyalty in a quest for safety, freedom, and ultimately, vengeance.

Vividly written and ambitious in scope, The Taster examines the harrowing moral dilemmas of war in an emotional story filled with acts of extraordinary courage.

As I have said before, I love reading WWII historical fiction.  This book is apparently loosely based on an interview given by one Hitler’s real life tasters she gave at the of age 95 to help release the secrets she has been carrying all her life.  This is what makes these books so interesting to me, they may be works of fiction, but they are generally based on some real life event so that I find that I find myself learning the history while immersed in the story.

Have any of you read this story?  What do you have on your Goodreads TBR shelf?